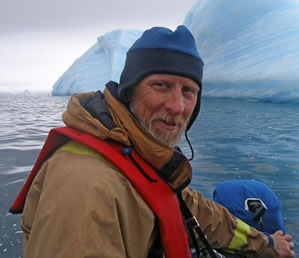 Grant Dixon is a photographer whose work encompasses landscapes, abstract patterns in nature, wildlife, travel and adventure subjects. He was born and still lives in Tasmania, Australia's island state. He trained as an earth scientist and worked professionally in nature conservation for several decades.

Grant has been exploring Tasmania's uniquely wild and wonderful landscape for some forty years, with camera never far from hand, and, for more than thirty years, has also trekked, climbed, skied and photographed (and sometimes all four) in many other wild and remote areas of the planet. He is particularly attracted to cool climate regions and mountain landscapes and has explored parts of all seven continents, and many different environments. Grant offers some insights into his photographic motivation in an interview here.

Images from Grant's travels have been widely published and continue the Tasmanian tradition of photography activating awareness of the environment. He co-publishes a calendar, Wild Tasmania, and has recently published his first book, Winter Light. His illustrated articles have appeared widely in various outdoor, geographic, conservation, travel and special interest publications internationally. Grant has also co-authored several guidebooks for Lonely Planet.

In 1997 Grant won the international "Escalade Nikon Mountain Photographic Competition", and was runner-up the following year. In 1998-99 he travelled to Antarctica under the Australian Antarctic Division's Humanities Program (now known as the Australian Antarctic Arts Fellowship). Grant was a finalist in the 2007 "Significant Images, Significant Places" photography prize exhibition, celebrating the 25th anniversary of the Tasmanian Wilderness World Heritage Area. In 2008 he won the People's Choice Award in the "Extreme Environment" photographic competition held with the Antarctic Midwinter Festival in Tasmania and in 2016 won the People in Nature category of the Wild Island Tasmanian Nature and Photo award. Several exhibitions have featured his images of Antarctica and Tasmania. Grant is a founding member of Nature Photographers Tasmania and is a member of Nature First, the alliance for responsible nature photography.